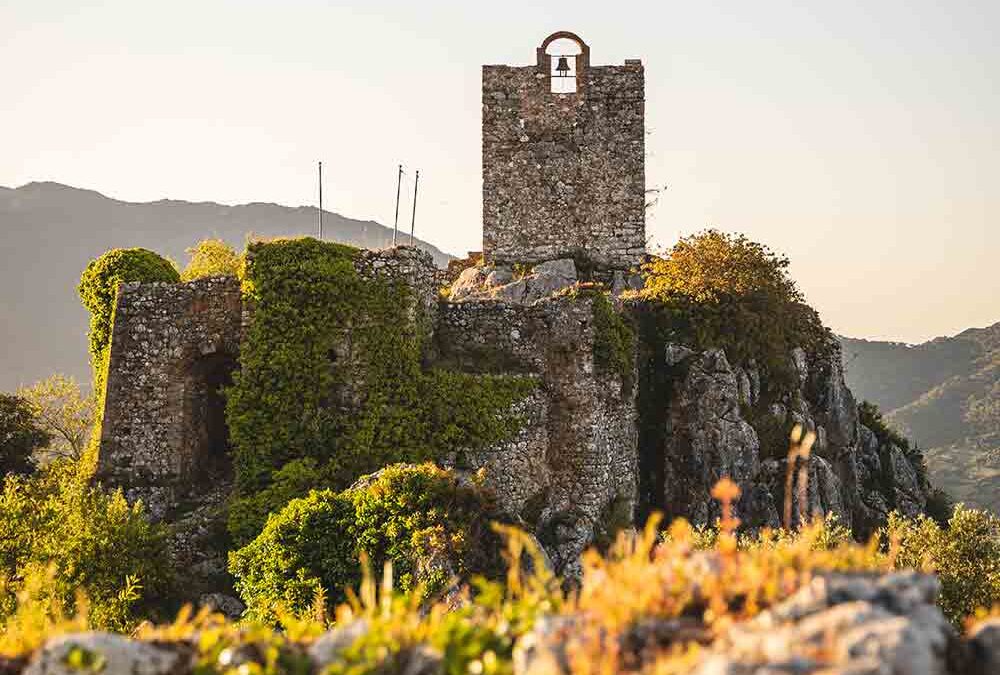 The Castillo del Águila (Eagle Castle) stands on a hard rocky promontory, more than six hundred meters above sea level. The original stones of the fortress are of Roman origin, although it was during the Arab occupation that the major developments took place creating the profile that we still see today. It was from these castles towers and walkways that the residents of Gaucin watched the burning of the ships of Umar ben Hafsun in Algeciras in the year 914.

Later, in the 11th century, Abd al Yabban, son of al-Mutamid, king of Seville, conquered the castle and further strengthened its defenses. In 1309, Guzmán el Bueno famously met his death here whilst trying to capture the fortress from the Arab rulers. Guzmán el bueno was a heroic figure who according to legend had defended the town of Tarifa by throwing his own knife to his enemies so that they could kill his son rather than lose the battle.
The body of Guzmán el Bueno, idealized by the Christians, was later transferred to the monastery of San Isidoro del Campo in Seville, where today still lay his remains.

During the French invasion the fortress was besieged. Heroic deeds are told about the castle during these years, with many skirmishes being recorded, and a long time passed like this before it was again reinforced. But misfortune fell again when in 1843 a powder keg exploded causing serious damage.

Much has changed in this century, and although today it remains the monumental emblem of one of the most beautiful villages in the Ronda mountains and the Genal valley, the castle stopped being young decades ago and has become a quiet historical place of interest where the spectacular views can be enjoyed by visitors and residents alike.

Its irregular plan, its three walled enclosures, the still conserved towers and the later constructions all continue to preside over the horizons of a typical white village, with a community and services worthy of larger towns in terms of both inhabitants and prestige.