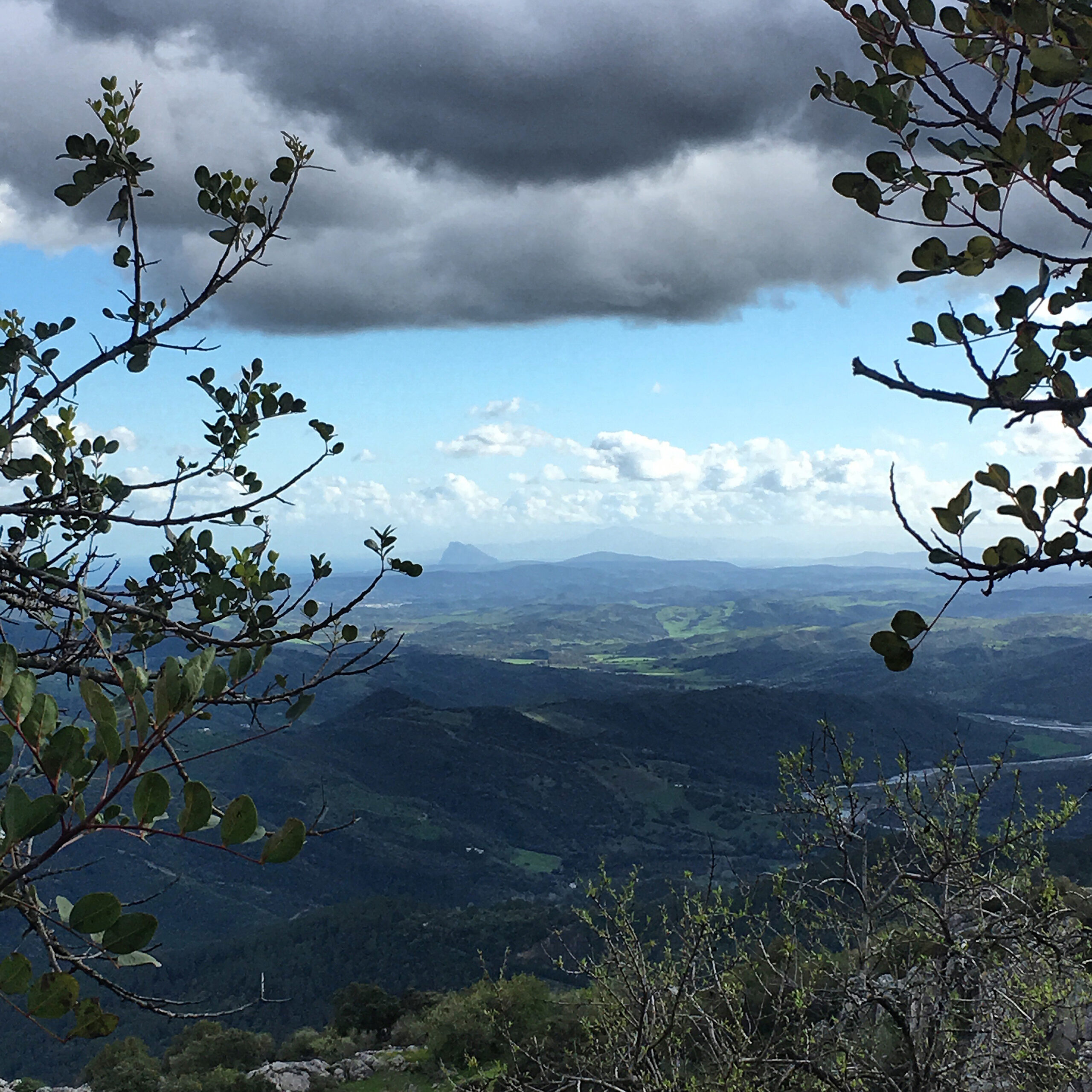 Gaucín is a mountain village of spectacular beauty located in the west of the Andalusian province of Malaga. One of the first famous White Villages of the Serranía de Ronda, the stunning views to Gibraltar and North Africa have led it to be known as the Balcony of the Serranía.

At over 600 metres above sea level and nestled in the foothills of the Sierra del Hacho and the mountains through which the Genal river flows, it is the perfect place to experience the beauty and culture of Andalusia.

Only 30 km from the Costa del Sol and 60 km from Gibraltar, Gaucín is easily accessible via the A377 road and is well connected to the ancient city of Ronda.

Gaucín enjoys a temperate Mediterranean climate and is blessed with over 2750 hours of sunshine a year. The cooler summer nights offer a respite from the heat of the day. In spring and autumn, you can enjoy the mountain air with clear blue skies and an average of 6 hours of sunshine a day, producing a unique light. During the months of April, May, June and October you are more than likely to enjoy temperatures between 20 and 25 degrees Celsius. The warmest time to visit is from July to mid-September when temperatures average around 28 degrees. In winter average temperatures hover around 16 degrees and the rainiest month is December with an average monthly rainfall of 124mm.

The origins of Gaucín date back to Roman times, when it is believed the castle was built, and indeed several artefacts from the Roman era have been discovered in the area. However, it was during Moorish occupation of the Iberian Peninsula that the greatest development took place, and the defensive structure was built on the rocky outcrop that gave the village its name, Sair Guazan or strong rock.

The village grew around the castle and the name of Gaucín is clearly of Arabic origin, as is its oldest street, built in the shadow of the ancient Castillo del Aguila, with its Moorish name, “Arrabalete”.

The Moors occupied Gaucín for many years, although several skirmishes took place during this time. One of the most famous is that of 17 September 1309, when the famous Guzman El Bueno died fighting against the Moors in the vicinity of the castle, in the area known as “Prados de León”. This is the only reliable historical record we have until the conquest by the Catholic Monarchs on 27 May 1485.

During the War of Independence, Gaucín fiercely resisted the invading French forces, but in a particularly bloody battle on 8 July 1810, Napoleonic troops murdered the inhabitants and burned all the municipal and parish archives. However, soon after, a group of heroic guerrilla fighters from the Serranía liberated Gaucín from the French soldiers.

During the 18th century, the village became a popular place for travellers to stop on the way to Ronda, and it became even more famous when Prosper Merimée chose Gaucín as the setting for an important part of his novel “Carmen”, although this was later modified by Bizet in the opera of the same name. 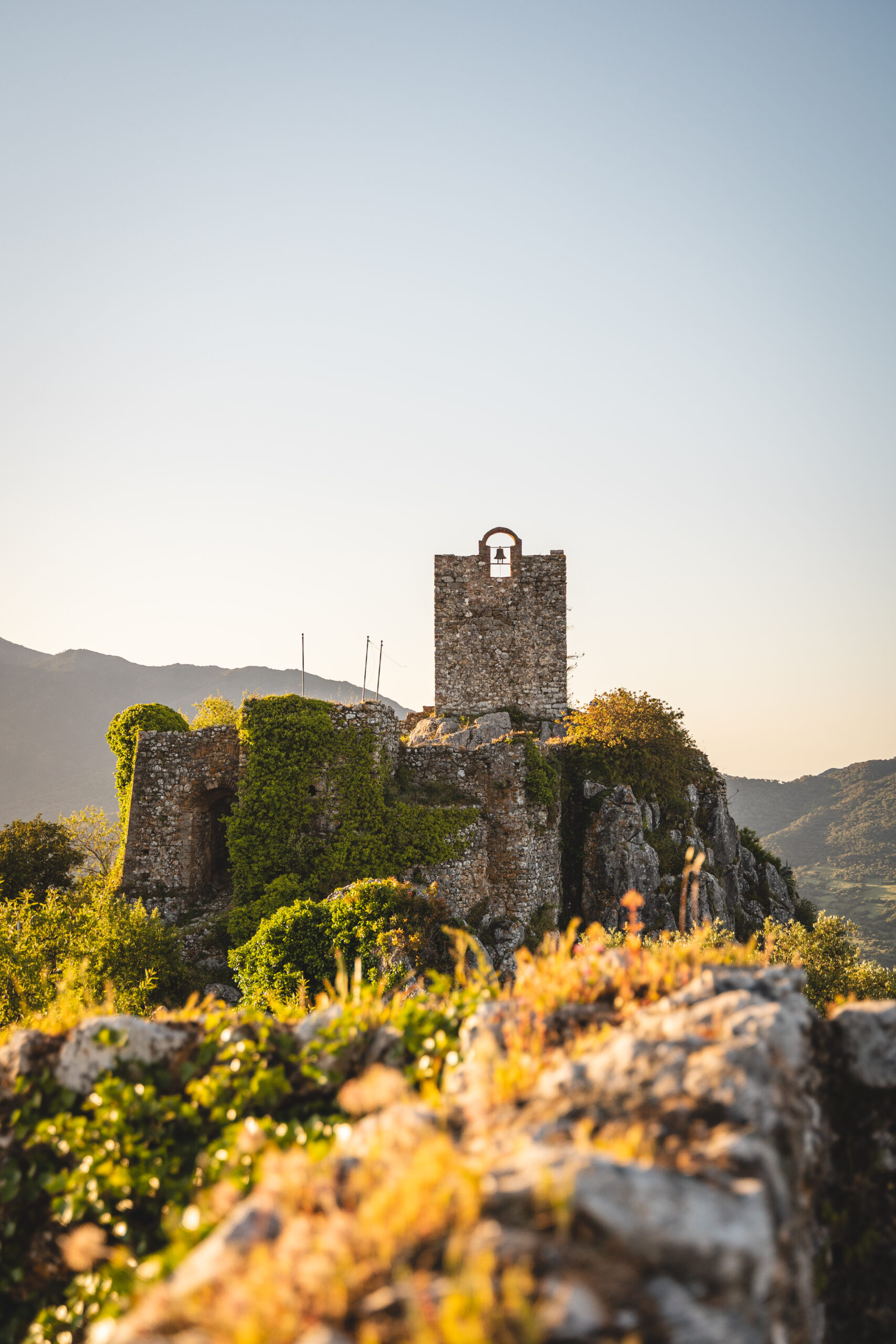 Andalusian gastronomy is greatly inspired by the Arabic cuisine of Al Andalus. It is rich in flavours and aromas and features local produce from land and sea. You will find typical dishes from this famous gastronomy in the bars and restaurants of Gaucín, accompanied by the olive oil, wines, cheeses and confectionery local to the area.

Throughout the year you can taste the “ollas serranas” or mountain hotpot, diverse chickpea stews and casseroles, a wide variety of iberico pork products and exquisite meats cooked on the grill or in sauce.

Spring is the season for stews with wild herbs and plants such as golden thistle, fennel, bladder campion or wild asparagus.

But it is Gaucin´s confectionery that is the most prestigious and famous, a legacy of its Moorish past. Flour, sugar and olive oil are combined in perfect harmony and flavoured with cinnamon, aniseed and sesame, sometimes accompanied by almonds and nuts. These ingredients are used to make the delicious roscos de almendra (a donut shaped pastry made from almonds), roscos blancos (donut shaped pastry with white icing), piñonate (candied pine nuts), alfajores (pastries made from almonds) and mantecados (pastries made with lard and almonds).

We invite you to take a pleasant stroll along the streets of Gaucín to explore every corner of our beautiful village and visit its monuments. Gaucin´s timeless whitewashed houses evoke their Moorish origin and the spectacular views already attracted travelling artists and writers back in the 19th century.

At the top of the village are the ruins of the Castillo del Aguila (Eagle Castle), open in summer (1 june-30 September) from 10.30-13.30 and 18.00-20.00 and in winter (1 October-30 May) from 10.30-13.30 and 16.00-18.00. The castle was reconstructed many times, the last time in 1808 during the War of Independence. It was reinforced in 1842 during the governance of General Espartero. You can choose to get there two ways, walking up Calle Larga until you get to La Laguna, along which you will pass the church of San Sebastian, built at the beginning of the 16th century and later restored in the Renaissance style on its main façade and bell tower, or along Calle Parras where you can also visit the cemetery and the view point, from where you can enjoy stunning views of the Genal valley and Africa and take beautiful photographs. The enclosure contains three water tanks and a mine or underground evacuation route, all of Arab origin. The castle was armed and manned up to the last century. Next to the fortress, on the eastern side, is the hermitage or Ermita del Santo Niño, a shrine to the patron saint of the village, which was once the barracks for the Civil Guard, and one of the towers of the castle which served as an ammunition depot.

On descending from the castle, we continue our walk and approach the Plaza del Santo Niño, the main square. Along the way we can enjoy a series of stately houses from the 17th and 18th centuries, with lintelled doorways and noble coats of arms carved in stone, as well as the traditional iron window bars and balconies made by the expert hands of the foundry craftsmen.

At the square we find the 18th century Fuente de los Seis Caños (Fountain of the Six Spouts).

This is a good time to take a break and have a drink in the many bars and restaurants of Gaucín.

We continue our walk to finish at the Convent of the Carmelites, which was formerly the Vera Cruz hermitage and dates to 1704. Recently renovated, it has now been converted into a cultural centre. 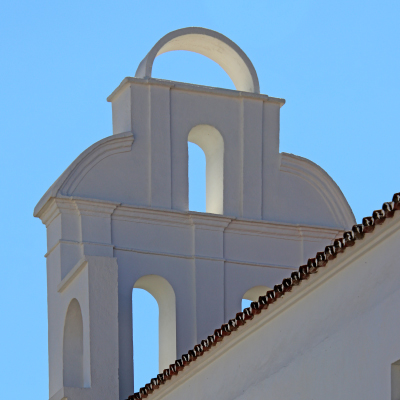 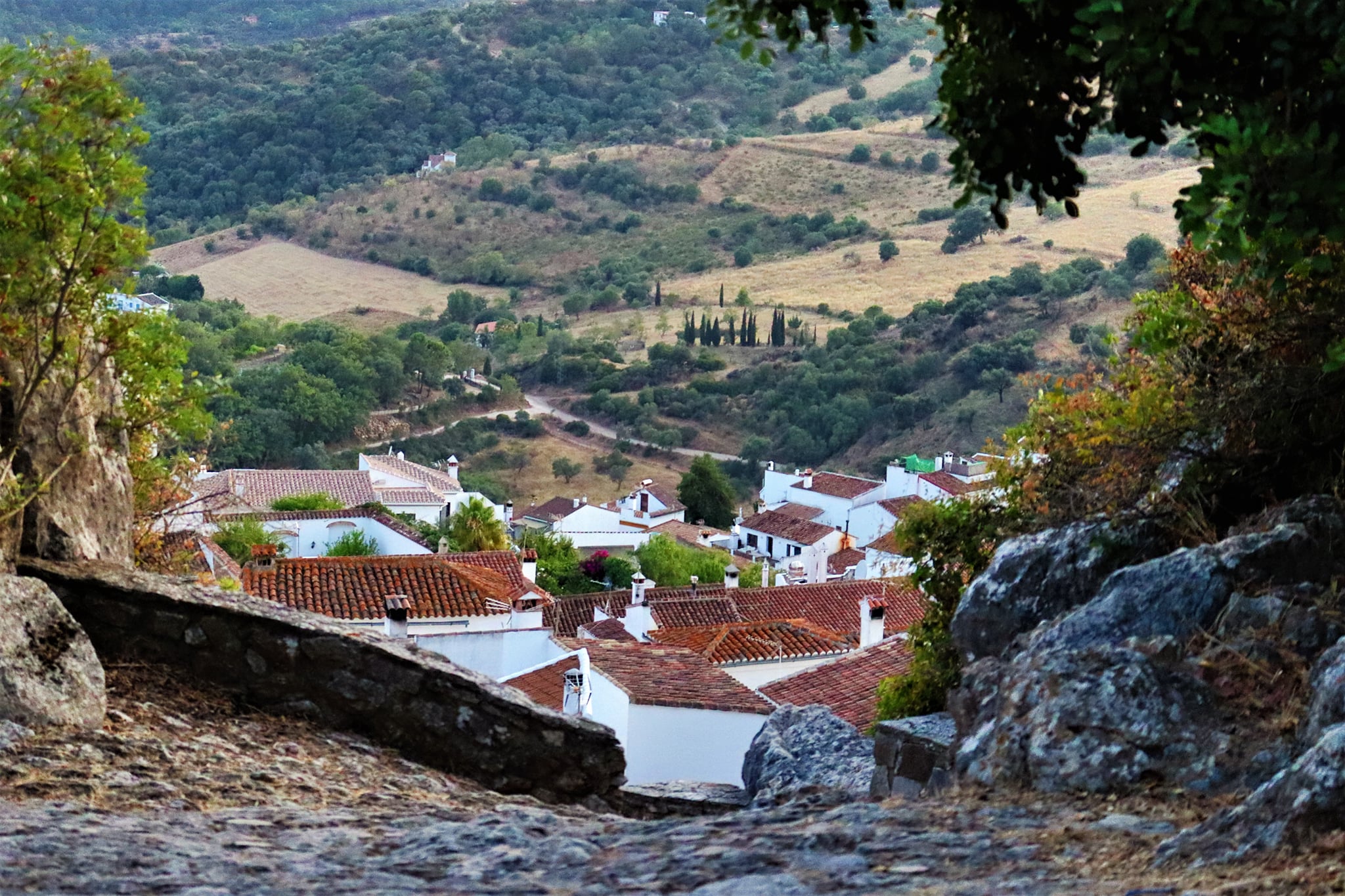 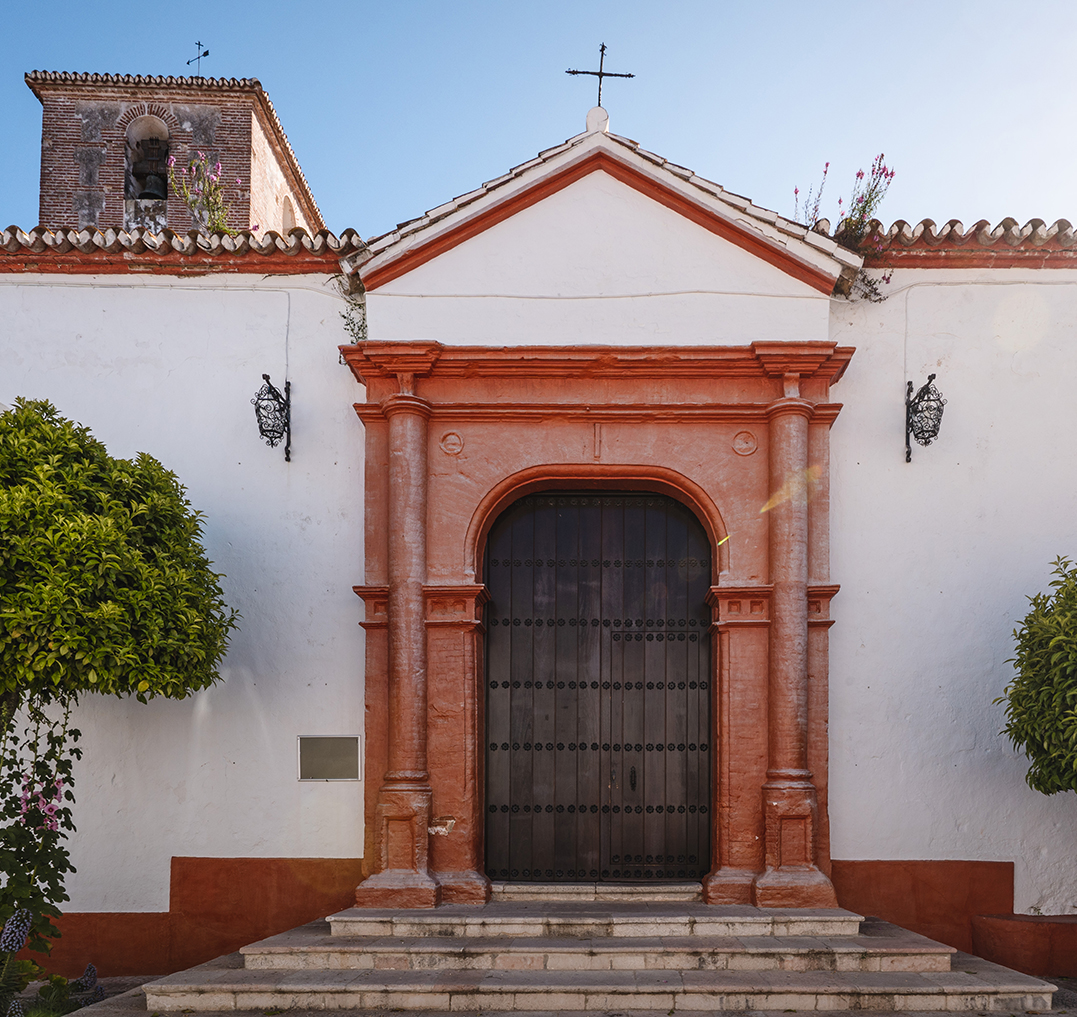 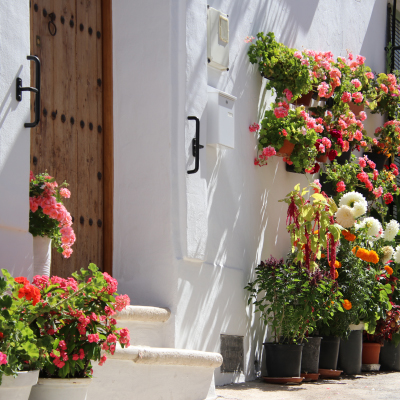