The ruins of the Castillo Del Águila are located at the top of the town, at 688 meters above sea level it dominates the Genal Valley, Campo de Gibraltar and North Africa. It receives this name because th presence of birds of prey is frequent there. The castle is of Roman origin but was reinforced by the Moors in the period of AlAndalus. Since then, it has been rebuilt several times. The wall, the Homenaje tower, the water tanks and an escape mine are preserved. Guzmán el Bueno died in the surroundings of the castle in 1309, when he tried to conquer it from the Moors.

On the facebook account visitgaucin you can find all the changes in the timetable due to special circumstances. 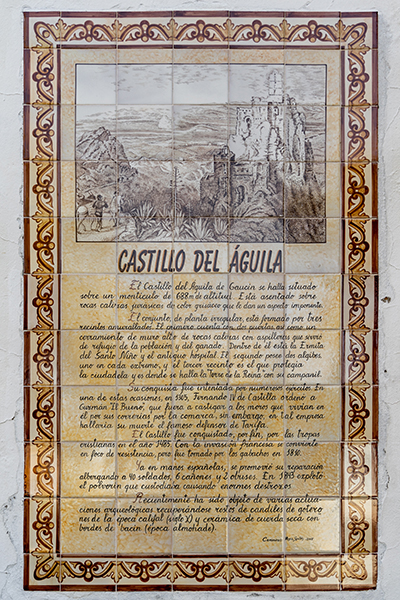 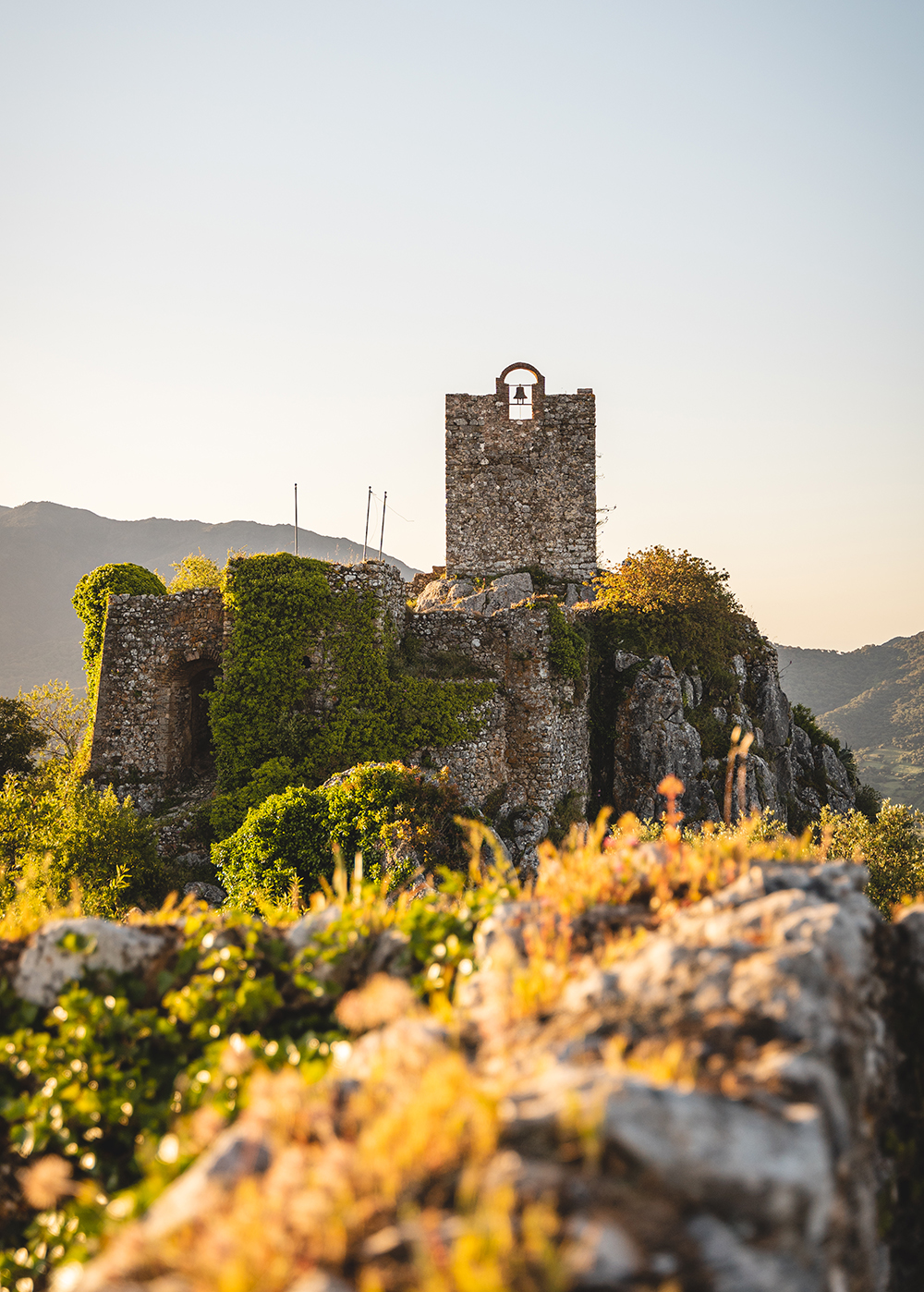 The Castillo del Águila was built by the Romans. However, it was the Moors who left the most traces in the enclosure after Abd al Jabbar, son of AlMutamid, conquered the castle of Gaucín in the 11th century. On September 19th, 1309 Guzmán el Bueno, Señor de Niebla, Nebrija and Sanlúcar de Barrameda, died fighting against the Moors in the vicinity of the Castillo del Águila, in the area known as the “Prados de León”. This fortress was later conquered by Christiantroops in 1485.

During the French invasion the castle became a focus of resistance, and it was captured in 1810. Years later General José Serrano Valdenebro, seeing its state of abandonment, began to refurbish the castle by cleaning the enclosure, the three water tanks, and the oven.This reform was intended to accommodate 80 soldiers and officers. In 1848 the ammunition dump exploded causing serious damage. 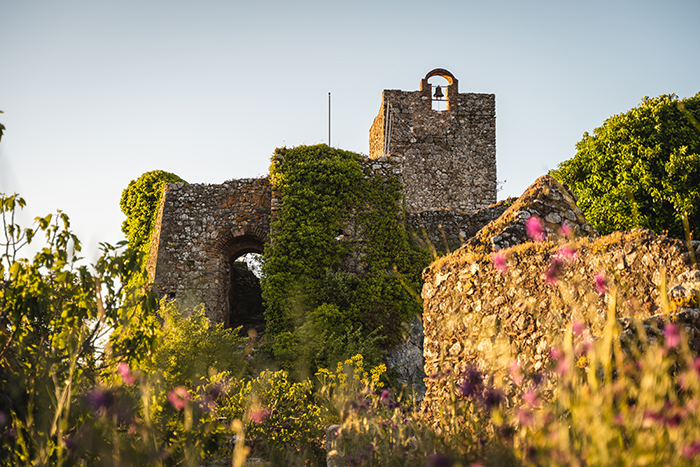 Located inside the Castillo del Águila, it was built in the 17th century. At one time it was equipped as a barracks. The interior of the hermitage has two naves and the exterior is made of masonry with a small atrium. It offers beautiful plasterwork, ornate stucco rosettes in the cupola and a side chapel. Inside we can find a polychrome wood carving of San Juan de Dios (John of God) and an image of the Santo Niño (Holy Child) in the central chapel. A parish church integrated into the urban area and built at the beginning of the sixteenth century. It was later restored in order to give it a Renaissance air on its main facade and bell tower. The interior is divided into three naves separated by square pillars. The base of the presbytery, which was previously the choir, is quadrangular with a dome supported on pendentives. On the sides, and forming part of the naves, there are two chapels covered with a groin vault with Baroque reminiscences. There are also different altars.
The altarpiece in gilded wood with images, consisting of three well differentiated sections, stands out. There the sculpture of the Virgen de las Nieves attracts attention. The exterior has a brick façade and a simple square tower with two bodies

It is possible to visit the church during mass hours. 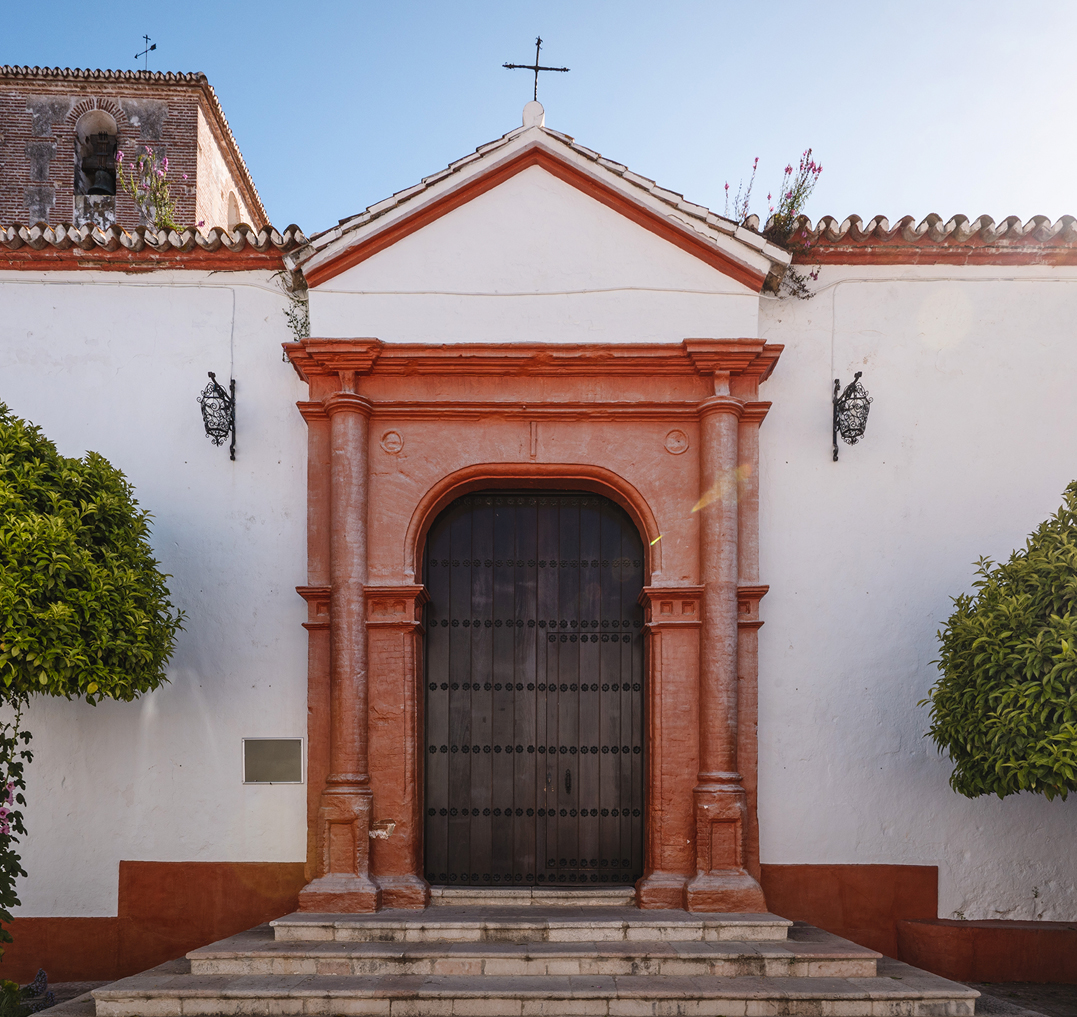 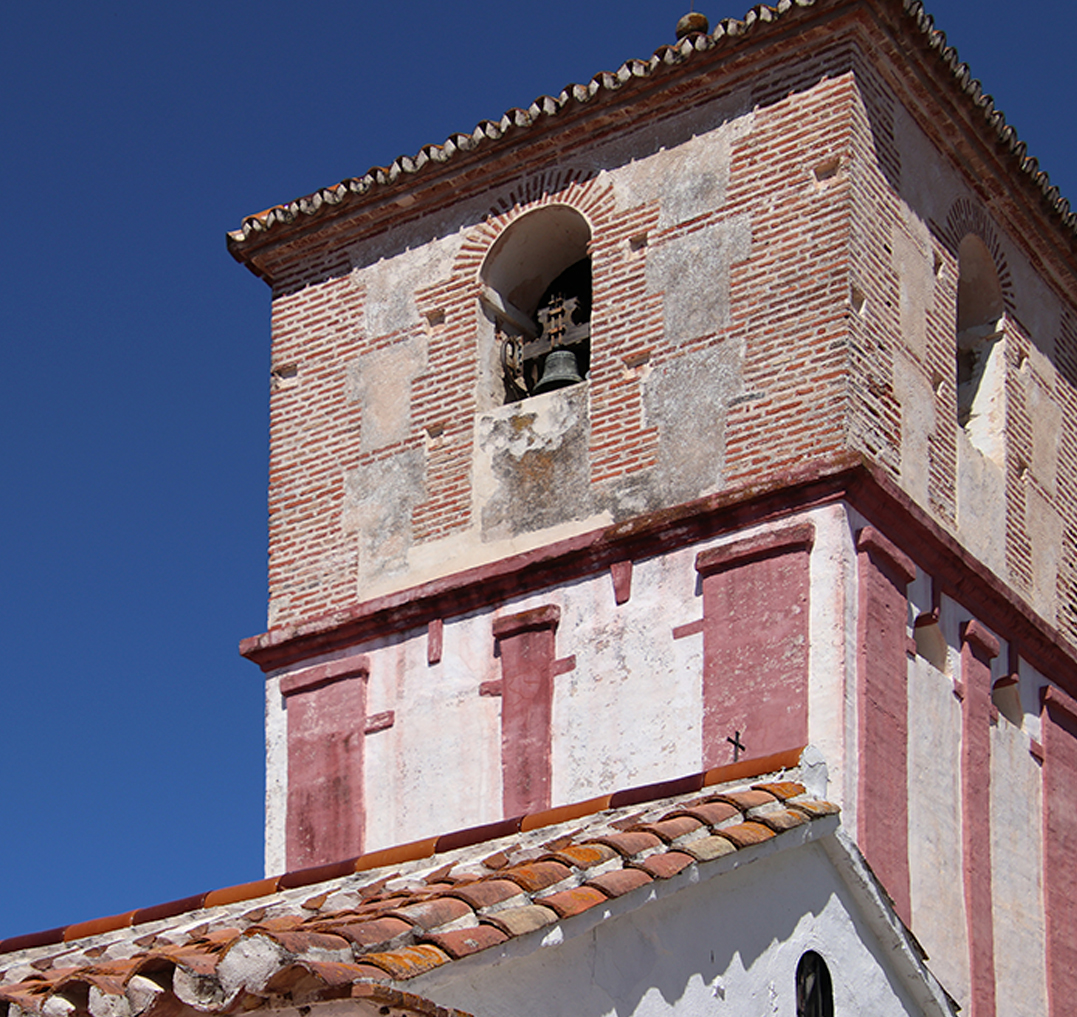 The Fuente de los Seis Caños, which is located in a small widening of the town square and was built in sandstone in 1628, is one of the most interesting works of the town centre. The fountain is marked by a pediment and two pilasters.
On the front there are six pipes, which are six different faces with the respective water outlets in the mouth. The upper part of the fountain is a closed pediment in the center of which there is a noble coat of arms. The latter has a vegetal decoration with curved and mixed lines of baroque style of the 16th century. As an architectural ensemble it could be said that it presents a baroque decoration with Herrerian reminiscences. 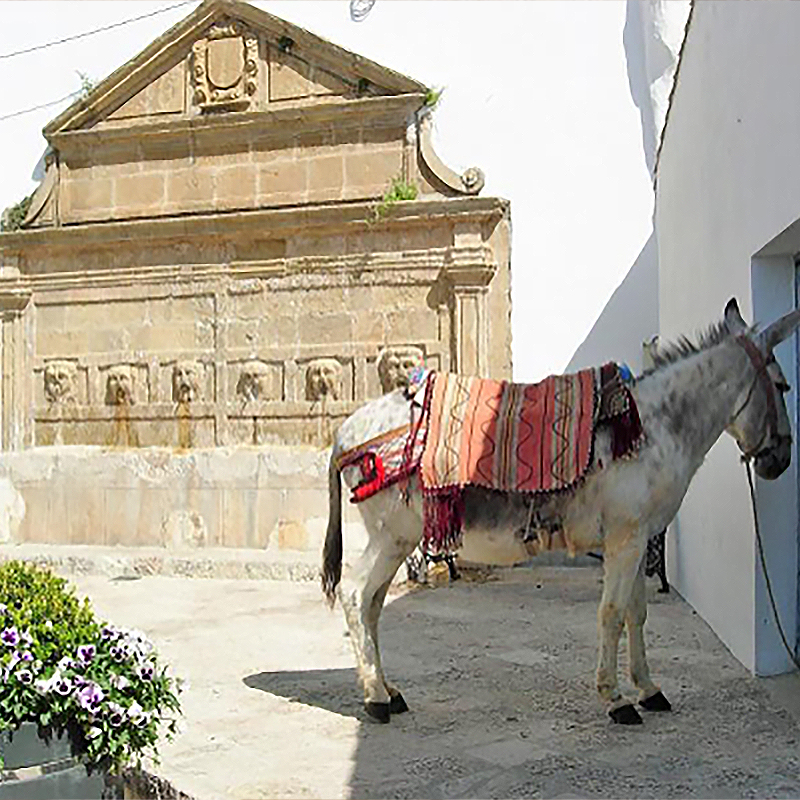 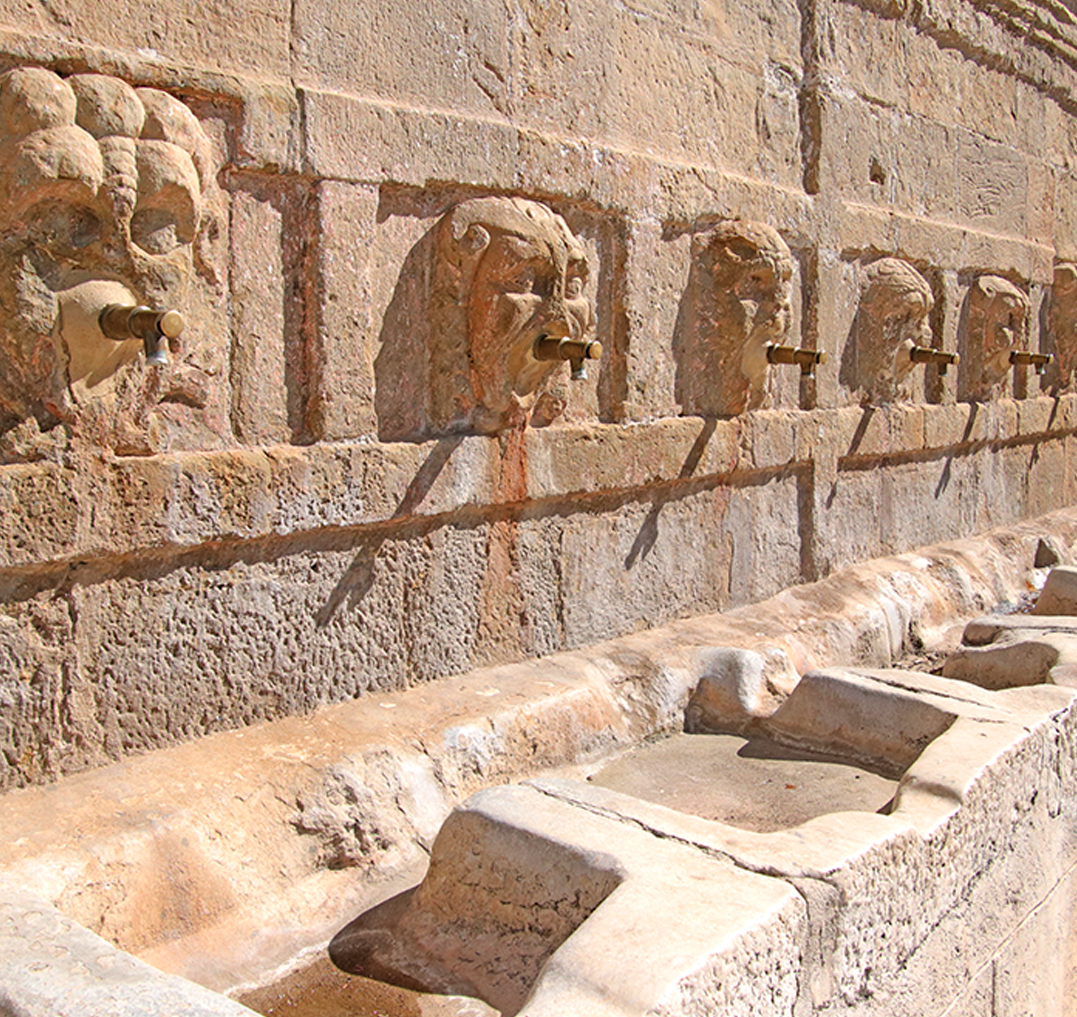 The Convento de los Carmelitas, located in C/ Convento next to the Parque de la Alameda, was previously the hermitage of Vera Cruz and dates from 1704. The building is made of brick, the central stone door is decorated with pilasters that support a triangular split pediment. On the right side there is a tower, also made of brick. The plan is rectangular with three naves separated by semicircular arches. On November 6th, 1982, the Diocese transferred it to the Municipal Corporation and, currently, the Casa de la Cultura (Cultural Centre) is located there and will soon be inaugurated to “host” all kinds of cultural events. 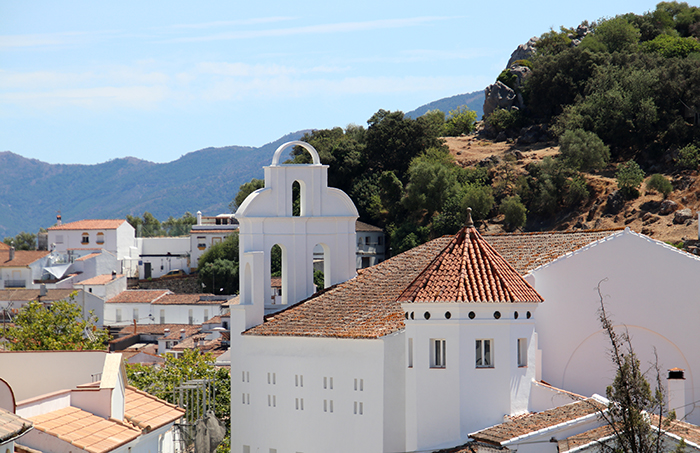 Built under the cliffs of the Castillo del Águila, the Gaucín Municipal Cemetery is of incredible beauty.
The lime tombstones contrast with the colors of both the surrounding flowers and the cemetery’s own wonderful garden.
If we look up we can enjoy the impressive tower of the Castillo del Águila.
Next to the cemetery is the Mirador de la Laguna, from which we can enjoy an incredible view of the Genal Valley with Gibralar and the coast of Africa in the background. The hermitage Ermita de San Juan de Dios is located 3.6 km south of the Castle, between the bridge over the Río Genal (Genal River) and the town of Gaucín. Going up from the river and halfway before reaching the town, take a trail to the right (next to Las Limas), ascending through it you will reach the Ermita de San Juan de Dios. You will also reach the Fuente de la Adelfilla, which is attached to the hermitage. This hermitage is also known as Ermita del Encuentro (the Hermitage of the Encounter), as this is the place where according to the tradition Juan Ciudad (San Juan de Dios) encountered the Holy Child (Santo Niño) in August 1536. The hermitage consists of a single rectangular nave with little decoration. It has a small tower, a Latin cross and a bell. At the top of its wide access door you can read the words that the Holy Child said to him in this same place: “Juan de Dios Granada will be your Cross”.(“John of God, Granada will be your Cross.)